Who is Daniel Negreanu? 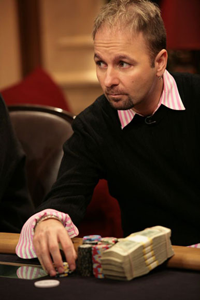 Negreanu, Daniel Negreanu in its full length, a name that makes many poker players' hearts beat faster because of his extreme popularity.

This poker pro was born in Toronto, in the year 1974, and has his roots in Romania. His parents, Constantin and Annie Negreanu, moved away from Romania only 7 years before, when they originally planned to start a new live in the United States of America, but settled down en route in Toronto, Ontario. Daniel has one older brother, Mike, who was also born in Canada, but 5 years earlier in the year 1969.

Daniel was only 15 years old when he was pursuing a career as a professional snooker player, and if it he didn't get introduced to the game of poker, he would have probably made it.

With only 16 years of age, Daniel Negreanu had already become a poker player feared by many in the casinos around Toronto, as well as in the illegal poker circuit.

He swapped the comfort of his parents' house in Toronto for a one-bedroom apartment in Las Vegas at the age of 22, where he moved to try his luck playing poker professionally. Unfortunately, Daniel found a much tougher players field and had to move back to Canada not long thereafter to rebuild his bankroll.

Annie Negreanu, Daniel's beloved mother who had been supporting him throughout most of his career, passed away in November of 2009, after suffering for 10 dragging months in the hospital.

Daniel has achieved some of the greatest accomplishments in poker. Not only has he won four World Series of Poker tournaments, including the much admired diamond bracelets that go along, he has also won two World Poker Tour titles.

In 2004 Daniel Negreanu won his biggest price ever, the astronomic amount $1,795,218, when ending first in the $15,000 buy-in Five Diamond World Poker Classic event at the Bellagio in Las Vegas. That very same year, during season 3 of the World Poker Tour, he’d already won another event, the Borgota Poker Open in Atlatic City, taking home $1,117,400.

Part of Daniel Negreanu’s fame and popularity comes from his participation in High Stakes Poker, a TV show aired on the Game Show Network (GSN), a United States cable television network, where the world’s best poker players compete playing cash poker games for astronomic amounts of money. The minimum buy-in for players to participate is $100,000, but players, including Negreanu, have bought in for much more, up to a cool $1,000,000.

Daniel Negreanu is not only a terrific skilled poker player, but now-a-days even a very respected poker author.

PokerStars offers several promotions for members to compete against their favorite poker pros. If you like to give the game of online poker a try at PokerStars, please make sure to use one of our links to benefit from a first deposit bonus of 100% up to $600.

Without questioning, PokerStars has grown to the biggest poker room online, hence favorite to many pros at the higher stakes tables, as well as many recreational players in the lower limits games.